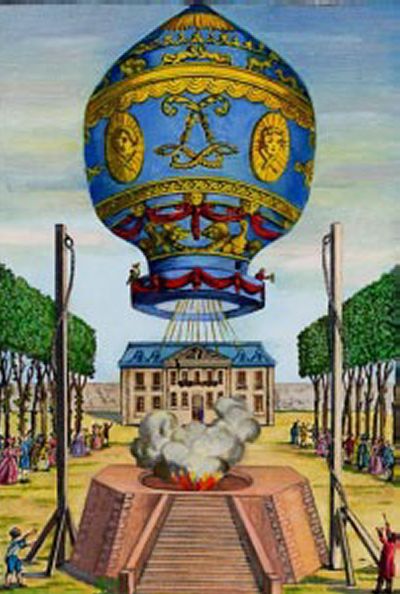 In 1752, there was an event that seemed to have nothing connected with hot air ballooning. American physicist Franklin discovered the electrical properties of bodies to reciprocate and repel each other. The brothers Etienne and Joseph Montgolfier who were fond of dynamic aeronautics and were trying to experiment with hydrogen-filled shells, they were familiar with this discovery and came to the conclusion that the problems of lifting clouds are their electrification.

In order to obtain a gas with electrical properties, they began to burn wet straw and wool. This material was used by analogy with the processes occurring in the electrograph, and they added water to produce a vapor similar to the composition of the clouds. Their balloons (at first they were rectangular shapes and only then spherical ones) they called aerostatic machines. One of these balloons of 3.5 meters in diameter was shown to relatives and friends. The balloon having risen to a height of 300 meters and stayed in the air for about 10 minutes.After that the Montgolfier brothers built a shell with a diameter of more than 10 meters, it was made of canvas, topped with paper and reinforced with a rope tape. A demonstration of this balloon took place on the market square in the city of Annone on June 5, 1783. A protocol was drawn up. This protocol reflected all the details of the flight. The balloon flew to a height of 500 meters and stayed in the air for about 10 minutes made a distance of flight of 2 kilometers. 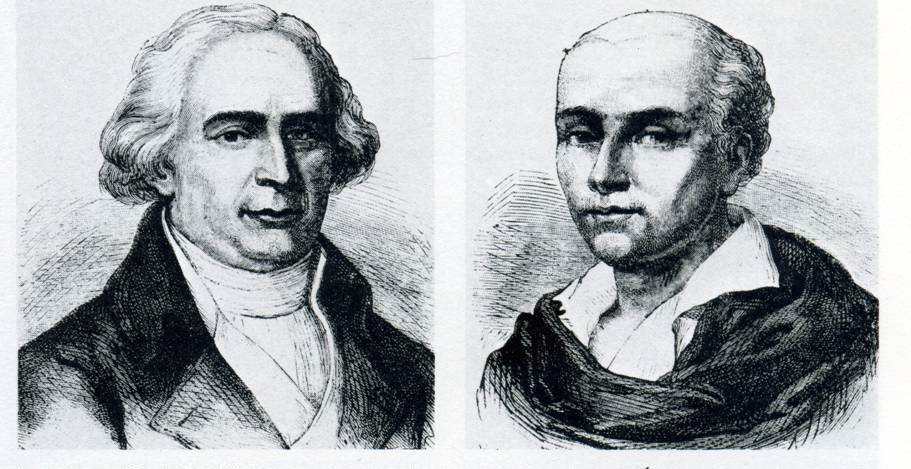 The Montgolfier brothers were hereditary owners of the paper manufactory, magnificent mechanics and inventors. The idea of ​​obtaining gas for an aerostatic machine belongs to Joseph. An error in the principle of the formation of the lifting force did not prevent them from making the greatest invention. Soon this error was discovered. At first the Swiss physicist Saussure proved that the lifting of the hot air balloon (the balloons of the Montgolfier brothers were thus called) was caused by the high temperature of the air in the shell, proving it in practice. Later, Emmanuel Eme showed that the main lift in the balloons of Montgolfier created heated water vapor — the result of burning wet straw. If the balloon was filled only with warm air, then because of the size and weight of the balloon, the air temperature should be more than 270 degrees and its shell would not stand.Nevertheless, on the basis of the protocol drawn up after the demonstration flight, the Paris Academy of Sciences appointed a commission that called the Montgolfier brothers for a second experience. The Academy also provided funds for the construction of the balloon. Etienne arrived in Paris. Under leadership of Etienne a hot air balloon of  an elonged shape was built. The shell was made of canvas, pasted on both sides of paper, decorated with ornament, its volume was 1400 m3 with a weight of about 400 kg.The time for the official demonstration was set for September 19, 1783, but on the trial tethering flight on September 11 the shell was completely useless because of the strong wind and rain. The appointed term was not changed, and in 5 days a new balloon was built. This balloon shell had a  shape close to the sphere, and was made of strong paper cloth covered with red glue paint, its volume was 1400 m3. On September 15, 17, 19 September 1783 the young physicist Pilatr de Rosier made trial flights on this balloon. He was 27 years old at that time.He makes the first riped flights alone, changing the altitude by controlling the fire furnace, and then flight to a height of 130 meters with Giraud de Viliente and the Marquis d’Arland. Pilatre de Rosier insisted on a free flight, but was denied.The date of the official demonstration of the balloon came. September 19, 1783 in Versailles (near Paris) in the presence of King Louis XVI in the courtyard of his castle at one o’clock in the afternoon, a balloon floated in the air, carrying in his basket the first balloonists with which the ram, cock and duck were. The balloon flew 4 kilometers in 10 minutes. It needed 2 poods (32 kg) of straw and 5 pounds (2.3 kg) of wool to fill it. It was a triumphal official experiment, after which the Montgolfier brothers were awarded, and their balloons from that day began to be called hot-air balloons. However, this flight was not without trouble: when landing, the cock damaged the wing, apparently, it was crushed by a ram, but this incident was the occasion for discussions about the danger of human flight. In addition, it was assumed that from a lack of air at altitude, a person could suffocate.Francesco Lana, who refused to build his «Flying Barque» was absolutely right when he predicted the possibility of using aeronautics for military purposes. Immediately after a successful attempt on September 19, Giroud de Villent expresses the idea of ​​using tethered balloons in military cases. He writes in the Paris newspaper: «I was convinced that this not particularly expensive machine can provide significant services to the army, allowing to detect the positions of enemy and to report of this with the help of signals. I think that with some precautions it can be used at sea.»The Montgolfier brothers together with their assistants began to build a hot air balloon specially designed for the free flight of a human. Louis XVI knew the danger of the balloon that’s why he ordered to send two criminals sentenced to death to the first flight. Pilatre de Rosier and the Marquis d’Arland who took an active part in the construction of the balloon convinced the King that this flight whatever its result is historical and it would be bed if the names of convicts became historically known.After that in one night the king changed his mind and agreed with two brave aeronauts. The hot air balloon took off from La Muette’s garden in Passy on November 21, 1783 at 13 hours 54 minutes& The balloon was managed by pilots  Rosier and D’Arland flew over Paris in 25 minutes landed in another suburb Butte-o-Gail flying about 9 kilometers at a height of up to one kilometer. The hot-air balloon had a height of 22.7 meters, a diameter of 15 meters, a shell volume of 1700 m3 and carried with it a cargo of 680 kg. At the bottom of the shell was a ring gondola (gallery).

There was a hanging place for burning straw in the middle of the gallery. The focus was located directly under the opening of the shell. The lower part of the shell was protected against fire. To be able to extinguish accidental ignitions, the gondola had water and sponges on long poles. In the flight the gallery caught fire, the fire could be extinguished, and at the time of the descent the shell almost burned, so that Louis’s fears were not in vain. However, the entire flight was very successful. The flight of Pilatra de Rosier and the Marquis d’Arlande in a balloon invented by the Montgolfier brothers marked the highest milestone in the history of mankind, which initiated free flights.